The following contribution is by Hal Elliott Wert, author of George McGovern and the Democratic Insurgents (Nebraska, 2015). Wert is a professor emeritus of history at the Kansas City Art Institute.

I’ve come to think that posters are like bananas, they come in bunches. And indeed since my last post, a raft of McCarthy, McGovern and Jesse Jackson posters have emerged from closets, attics, basements and other places where they had long been forgotten. Included are a couple of posters discovered from archives in which I had been rooting around in or from auctions I’ve perused. If I had a wish, I’d jump in a hot tub time machine and be able to include a number of these finds in George McGovern and the Democratic Insurgents. Since my hot tub strategy, after repeated attempts, has not borne fruit, here’s what’s popped up. 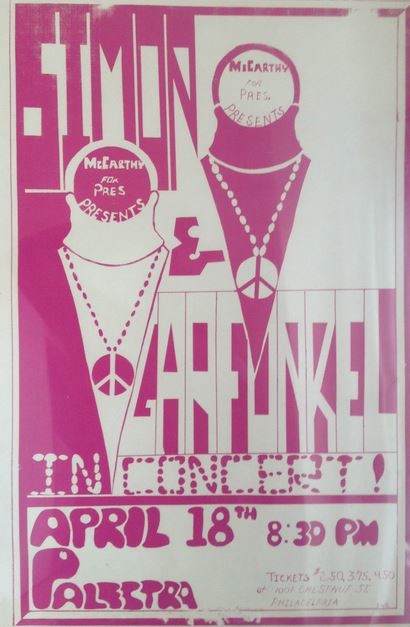 Simon and Garfunkel began the first of three benefit concerts for Eugene McCarthy in the Palestra Gym at the University of Pennsylvania. No longer button-downed, these cheering anti-war Ivy League students were determined that “Clean Gene” would head the Democrat ticket and end the war in Vietnam. A few weeks earlier the Ides of March roiled the political world. McCarthy notched forty-two percent of the vote in the New Hampshire primary, RKF announced that he’d enter the fray, and President Lyndon Johnson withdrew from the race. Five days after the Simon and Garfunkel concert on April 18, McCarthy swept the Pennsylvania primary scoring seventy-one percent of the vote.

The path to the presidency now open, McCarthy supporters campaigned passionately against what they saw as an opportunistic RFK in a cross-country battle devoid of peace and love all the way to the California primary. Along the way, Simon and Garfunkel performed two concerts for McCarthy in Indianapolis and in Bloomington, Indiana but the folk duo’s magic failed to carry the Hoosier State for McCarthy. RFK pulled the win, lost the Oregon primary, but triumphed in California by four percentage points. At his victory celebration in the Ambassador Hotel in Los Angeles, just after midnight, he was mortally wounded by Sirhan Sirhan. The Democrat party and the nation were thrown into disarray. At least two handbills were produced for the Pennsylvania concert, for the others see George McGovern and the Democratic Insurgents (GMDI) on page thirty-eight. Of the two, this one is the rarer: 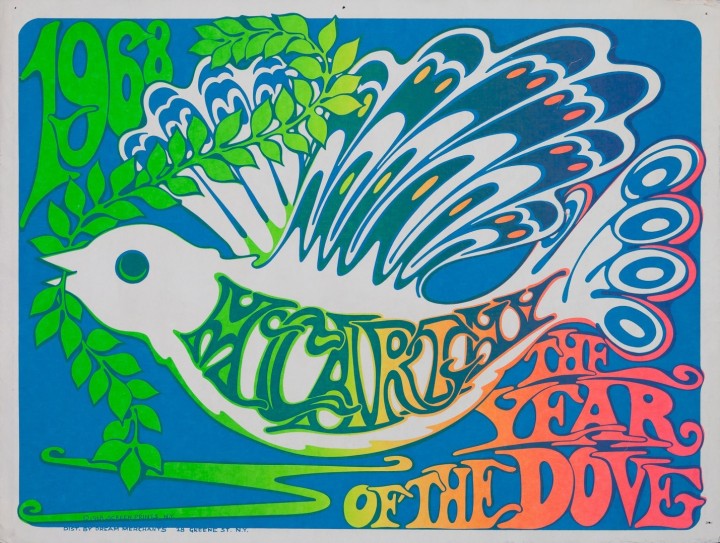 Of the dozens of McCarthy posters tucked in my flat file, this Art Nouveau influenced beauty; gig poster lettering, pastel colors, and the ubiquitous peace dove soaring aloft, made this one of the top 1960s political posters. 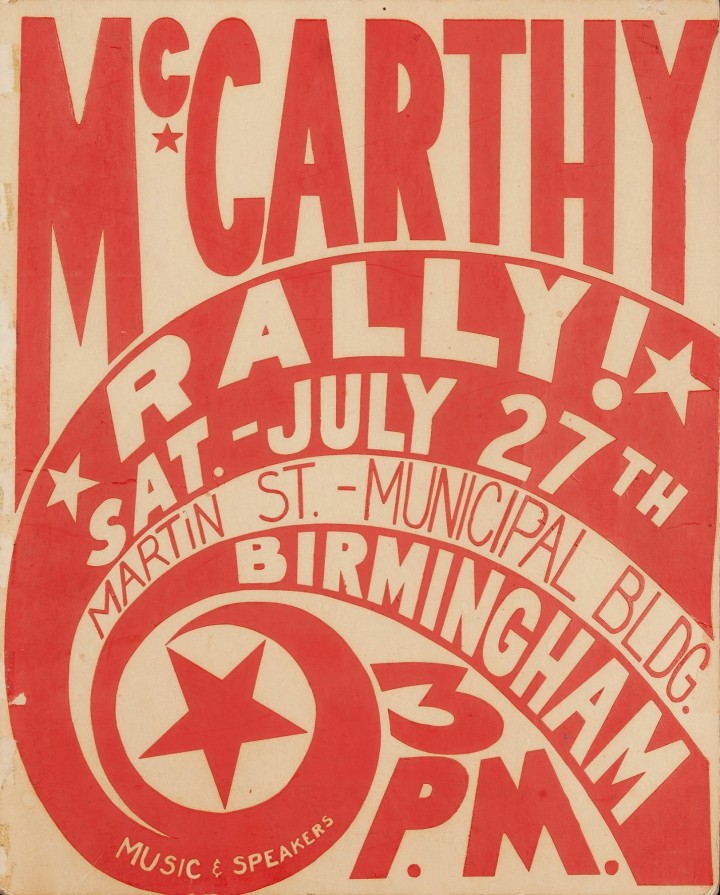 One night political events outside major cities are usually long on enthusiasm and short on cash so this window card designed in the prevailing counter-culture style by McCarthy supporters in Birmingham, Michigan was likely a small run. The event was part of a nation-wide weekend series of rallies intended to produce a wave of support that would propel the monkish McCarthy into the White House. 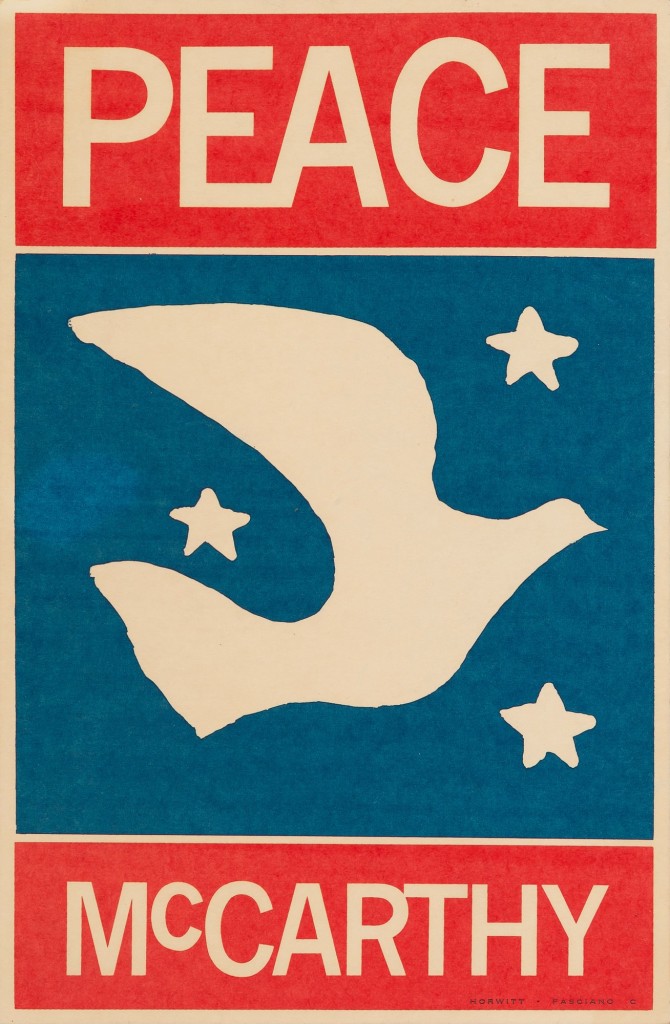 This small window card takes the cake for design simplicity. The well thought-out use of text and visual language; tone downed use of our national colors, the inclusion of three white stars and the large white dove pointing the way to our future, come together to effectively push the message. I have discovered next to nothing about who designed the window card or where it was put to work. If you can help, please let me know.

Few event posters ever heralded a greater truth. This closed circuit TV rally aired six days before the opening of the Democrat Convention in Chicago; devoured a huge chuck of the remaining McCarthy campaign funds and really was a now or never last gasp. Vice-President Humphrey had the votes and unless delegates could be persuaded to renege on their commitment to Humphrey, the McCarthy insurgency would come to an end. Amidst the chaos and violence that pervaded the hellish Windy City convention the establishment won. A bitter McCarthy refused to support the Humphrey/Muskie ticket. He left the Democrats, encouraged a write-in campaign in his behalf, did poorly in the 1972 primaries and then supported McGovern, ran as an Independent in 1976, and ended up supporting Reagan in 1980. This, I guess, is what you call full-circle. 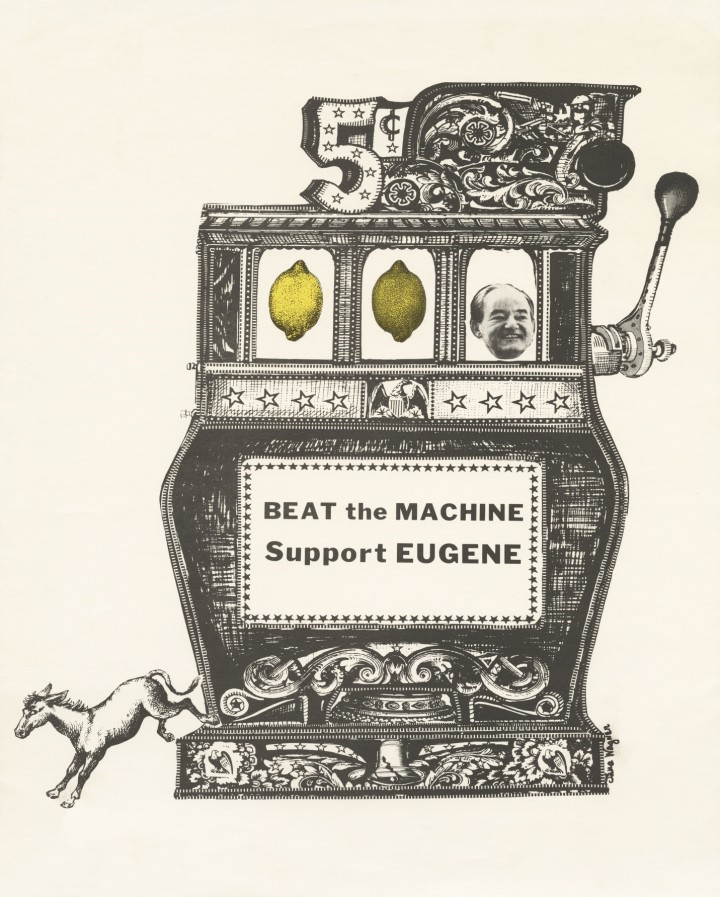 Eugene did not beat the machine. Hubert Humphrey encumbered by the albatross of Lyndon Johnson around his neck proved a lemon. Richard Nixon triumphed in a close election but Humphrey loyalist, clinging to their candidate’s late surge in the polls, forever argued that had the election been one week later H.H.H. would have won. While the machine got its nominee in 1968, the anti-war youth rebellion got its candidate in 1972 with George McGovern. This clever poster is all but impossible to obtain but you can download a free high resolution copy from the Minnesota Historical Society.

To my delight, yes, another attractive McGovern screen print surfaces. This is always exciting as I speculate that I may discover the artist or learn there were larger sizes or that there was a signed numbered limited edition.

Black light posters were all the rage in Age of Aquarius but very few were campaign posters. Hitting McGovern’s main campaign theme calling America home from Vietnam in a splash of Day-Glo color makes a very desirable poster. Hey man, if you find one, tack it up on your bedroom wall, traipse down to Walmart for a black light, and drop by your local marijuana distribution center and pick up a bong. While staging this historical reenactment, the merits of this poster will soon become apparent. 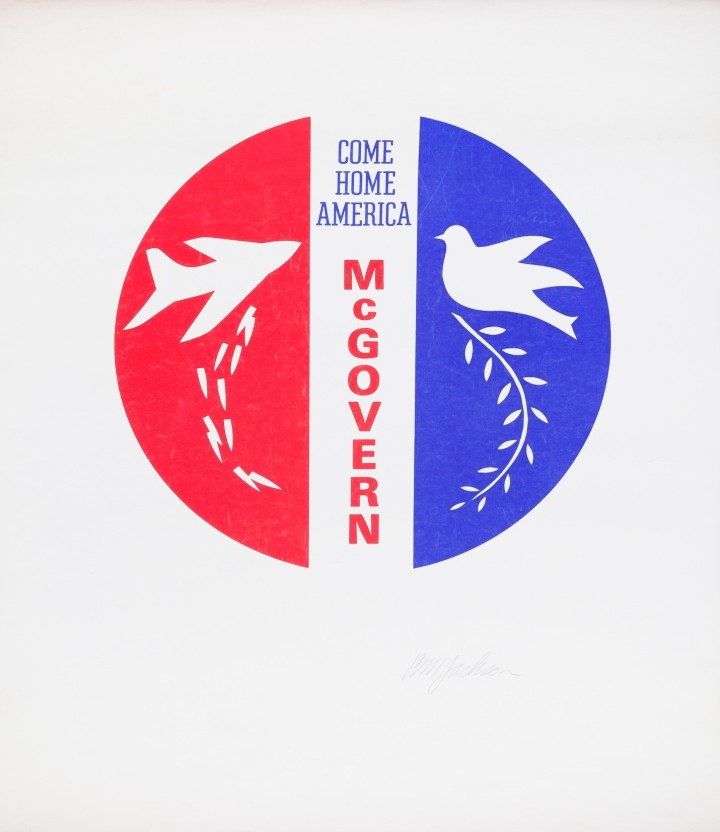 Billy Morrow Jackson, University of Illinois painter and printmaker, produced this signed open edition screen print. I know, it’s hard to see the signature. Jackson, as well, pulled a limited signed edition of 300 and an open edition offset in at least two sizes some of which he signed. The various posters and a large campaign button are favorites among campaign memorabilia collectors. See page 156 in  GMDI.

Frank Mankiewitz, RFK’s Press Secretary and later one of McGovern’s campaign managers, said in the foreword to GMDI, “He was, indeed, the most decent man in the Senate, but also, most certainly, the most decent man we’ve produced in public life.” Obviously the woman holding the handwritten sign agrees. This delightful photograph also demonstrates that not all McGovern supporters were young, had long hair, and wore Birkenstocks. Given the coat rack against the wall and the older crowd, I’d guess the photo for this poster was from a caucus precinct in Iowa. McGovern trailed Ed Muskie of Maine in Iowa and in New Hampshire but went on to secure the nomination.

Enough said, this window card by designer J. Erdoes clearly hammers home the candidate’s stance on array of issues. The window card’s bold use of color and its simplicity give a certain charm.

George McGovern, “Man of the People,” worked hard on cornering the Latino vote and received the enthusiastic support of the United Farm Workers of America led by Cesar Chavez. Note the UFW’s pin and “Boycott Lettuce” button on the lapel of this enthused McGovern supporter. The man is likely Arturo Mendoza, a UFW board member.

One of two posters for this Motown splash, a week before the election, aimed at getting out the vote. Here the pitch is for Clinton as a “cool celeb.” He’s a gas, he’s a gas, he’s jumpin’ Bill flash. In 1992, Clinton, as a Blues Brothers stand in and in any number of other incarnations forever changed American politics. Now, stardom and personality rose as attributes candidates needed to possess. For the other poster for this Detroit gala see GMDI on page twenty-four.

Hope you enjoyed these recent discoveries. Please check back soon as I’ll be back with a number of fine looking Jesse Jackson posters rarely seen and a long sought dynamite Shirley Chisholm poster from the 1972 Wisconsin Primary by William Weege. 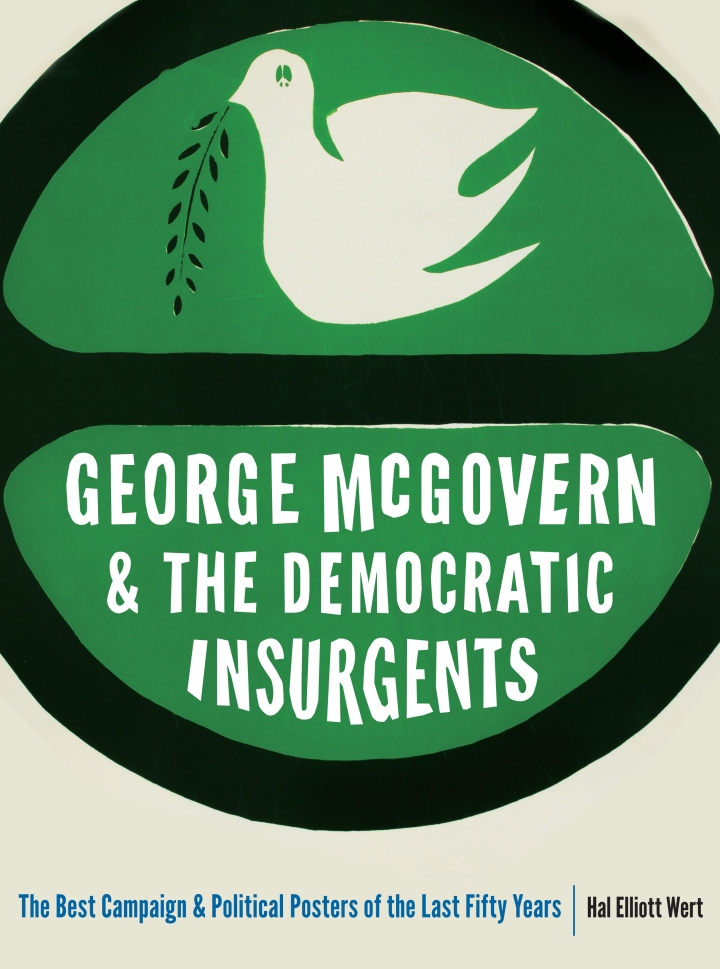 6 thoughts on “From the Desk of Hal Elliott Wert: A Bonanza of New Discoveries”