The following contribution comes from Hal Elliott Wert, author of George McGovern and the Democratic Insurgents (Nebraska, 2015). Wert is a professor of history at the Kansas City Art Institute.

First, let me thank all of you that have purchased a copy of George McGovern and the Democratic Insurgents or those who have had the chance to peruse the book in a library. I hope you’ve enjoyed the images as well as the accompanying tombstones and text. One of the most exciting but also frustrating things about assembling a collection of American political posters is that unknown ones keep popping up in a wide assortment of venues. My editors at Nebraska were patient with me and let me keep adding “new finds” for as long as possible. Finally, the cut-off day arrived and the book went off to press. Since publication a number of posters have emerged that I sorely wish I could have included. The UNP blog seems to be the place to add new images of political posters of merit as a major reason for the book was to collect, preserve, and make known these underappreciated and ephemeral pearls of our shared political past—a paper trail if you will. So, here is what has recently emerged:

“Outrageous!” in the lingo at the end of the hippie era meant “AWESOME” and that’s what this poster is—outrageous, which is awesome. Robert Newman and Ed Wong-Lidga, enthused by Chisholm’s candidacy, screen printed in their Palo Alto garage, a run of between fifty and one-hundred-fifty prints. Pulled on cheap paper, many succumbed to the elements and the poster is quite rare. “Outrageous!” is one of the top political posters of the 1960s era.

Samuel N. Antupit, a prolific New York designer and illustrator, created this small run of screen prints on heavy brown paper that were sold at Eugene’s, a political cabaret that opened at 1034 Second Avenue in the Big Apple. It is likely that Antupit signed a few but none have surfaced. A larger poster, 24” by 24,” a lithograph with a white background and a line of information at the bottom, received wider distribution. See page 41 in George McGovern and the Democratic Insurgents. 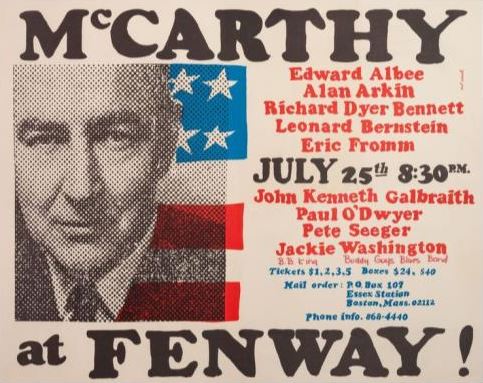 Art Wood, a political cartoonist, created three posters for the McCarthy campaign, all using the same photo and a flag motif. Unlike the other two posters, with McCarthy at Fenway Wood abandons his earlier formalism and employs text that appears handwritten, a nod to the hipster style so popular on psychedelic gig posters that proliferated in the 1960s. You can compare the styles by taking a look at page 39 in George McGovern and the Democratic Insurgents. With the Democratic Convention in Chicago looming, McCarthy’s “children’s crusade” staged in late July and early August star-studded rallies in major cities across the U.S. Only recently have a small number of these rare posters surfaced.

Clean Gene did not support the 1968 Democratic ticket and thereafter made repeated attempts to build a third party based on disaffected left leaning Democrats and young voters in search of alternatives to what they perceived as the tweedle-dee and tweedle-dum choices of the two major parties. McCarthy’s best effort was in 1976, as he was on the ballot in thirty states and was a write-in candidate in California and Oregon. He tallied roughly 750,000 votes. Because the Independent Party had very little money, grassroots supporters created a large number of hand-drawn or screen printed posters. Many of these posters have artistic merit and unknown examples will continue to pop-up. The stubborn McCarthy independent movement attempted to mount campaigns in the next several presidential elections but the efforts of his die hard supporters were for naught.

Not many McGovern window cards turn up, so this find for a dinner affair in Chicago was gratifying. Mayor Daley was no fan of McGovern but the candidate campaigned there and the mayor, out of party loyalty, was respectful. In 1972, Daley was still fuming over the riot in Grant Park and the trial of the Chicago Seven. The dinner plate motif makes this an attractive poster. 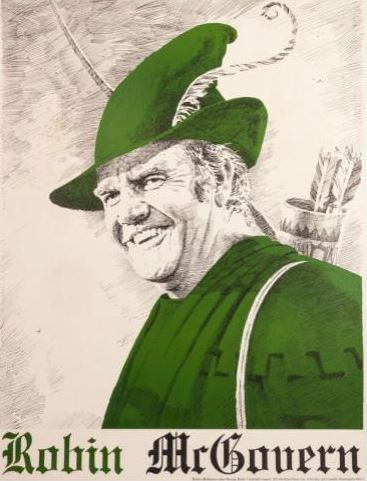 This “Robin McGovern” fun poster and 3 ½ inch campaign buttons were created by David F. Stern for the Oregon primary. Stern’s rendering of his candidate must have proved effective as McGovern cruised to victory in Oregon, won the California primary in early June, and secured the Democratic nomination in August. There are two versions of the poster, one with the “Robin McGovern” lettering at the bottom removed and the one shown above which turns up less frequently. Take a look at page 121 in George McGovern and the Democratic Insurgents for the alternate version. The image was a hit and soon went national. For Republicans and Democrats opposed to McGovern, the image confirmed their deepest suspicions of where the candidate wished to take the country. Rightly so, the poster is a classic.

I have always been a sucker for cheaply printed slappers featuring one night circus-like political rallies. I mean, fun; Ifateyo Dancers, Jazzpiper, and a cash bar, “Jees, see you there!” 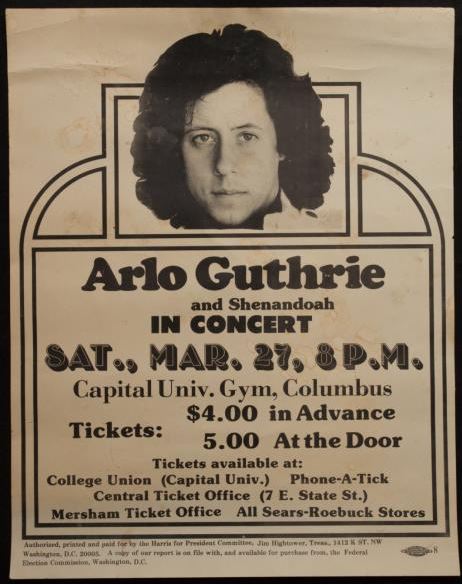 A first look at this poster and it’s hard to know that Arlo is doing a benefit concert for 1976 presidential candidate, Fred Harris, the Oklahoma darling of the Democratic left and the godfather of modern populism. Arlo campaigned for Gene McCarthy in 1968, did a few concerts for George McGovern in 1972, and undertook a nation-wide tour for Fred Harris in 1976. Harris and Guthrie shared roots as Arlo’s daddy Woody hailed from Okemah, Oklahoma. Harris and his Comanche wife LaDonna, crisscrossed the country in an RV riding on populist slogans that politically ring with more authenticity now than in 1976—“The issue is privilege,” “Take the rich off welfare.” The Arlo benefit concert posters for McCarthy, McGovern, and Harris are all seldom seen but more posters for these one night events should emerge.

To conclude, I’ll keep you posted on new finds. If you have posters you’d like to share please post in the comment section. If you have questions about posters in my book or comments, please post those, too! Again, thanks for buying the book.

2 thoughts on “From the Desk of Hal Elliott Wert: More Political Posters Discovered”